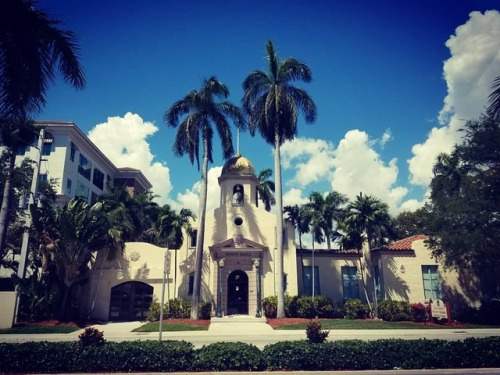 Another #beautifulfla morning in #bocaraton #fl The Boca Raton Town Hall is a Mediterranean Revival structure, originally built in 1927 as the city’s first town hall. The building’s architect was Addison Mizner and the name Mizner is featured prominently in this section of Boca Raton on park’s, streets and buildings. Mizner was primarily a resort architect and his Mediterranean Revival and Spanish Colonial Revival buildings definitely made a stamp on #southflorida where it continues to inspire building construction; in fact if people own a home desined and built by Mizner, the home will sell for a premium. Mizner Industries, still in existence today, was founded to supply the needed tiles for Mizner’s constructions. By the 1970s, Boca Raton had outgrown the building, but the city rededicated the building to be the city’s museum in 1975 and it continues in that role to this day having been placed on the #nrhp in 1980 (at Boca Raton, Florida)
https://www.instagram.com/p/BwHwWYCHxam/?utm_source=ig_tumblr_share&igshid=1kjz6gtmofw2z